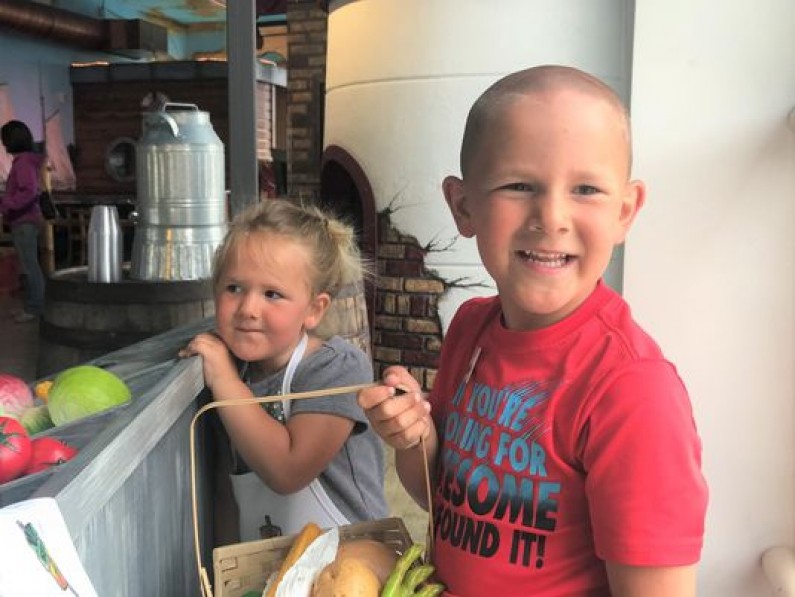 The Above and Beyond Children's Museum has a new exhibit that debuted last week. The Festival Food Fresh Market now occupies the third floor of the children's museum.

The new exhibit is an interactive space that allows kids to walk around a farmers market that features fresh (plastic) foods. There are also sections with real veggies for kids to eat. One featured veggies and ranch and the other was a "Make your own salsa" station.

"Not only do we want children to have fun--because we know play-based learning is so important and they're not getting as much of that in the schools as they should be--but also we want to foster nutritious eating habits and for them to think about fruits and vegetables," said executive director of the museum Emily Rendall-Araujo.

Kids ran around on the grand opening day last Saturday and laughed as they played with the pretend bread and other farmer's market foods.

"We've heard some really cute feedback already. Just this morning I heard one little girl say, 'Wow!' and then her friend said, 'I know! There's new stuff!' which was cute," said  Rendall-Araujo.

The new exhibit is a collaboration between the museum and Nourish, a nonprofit focused on helping Sheboyganites access fresh foods.

"Nourish has been with us for the whole ride. In designing the exhibit, what food we should offer, programming moving forward. So we're really excited to have this," said Rendall-Araujo.

The exhibit was sponsored by multiple local organizations, including the Sheboygan Early Bird Rotary Club, The Alliant Energy Foundation, and Sargento Foods, with Festival Foods being their largest sponsor.

The museum is open from 10 a.m. to 6 p.m. Tuesday through Sunday and the exhibit will be up for at least five years. The museum is located at 902 North 8th St. in downtown Sheboygan.